Weight Can Play a Role in Sleep Apnea

Weight and sleep apnea are endless cycles with both having the ability to affect one another. For instance, gaining weight can cause sleep apnea, and having sleep apnea can cause weight gain. Gaining more weight can also cause your sleep apnea to worsen. In these cases, it might feel impossible to know what to do. That’s where our sleep dentist at Firouzian Sleep Wellness in Columbus, OH can help. Whether you have sleep apnea or you’ve been putting on weight, it’s crucial to understand how weight can play a role in sleep apnea and what you can do to lose weight and improve your condition. 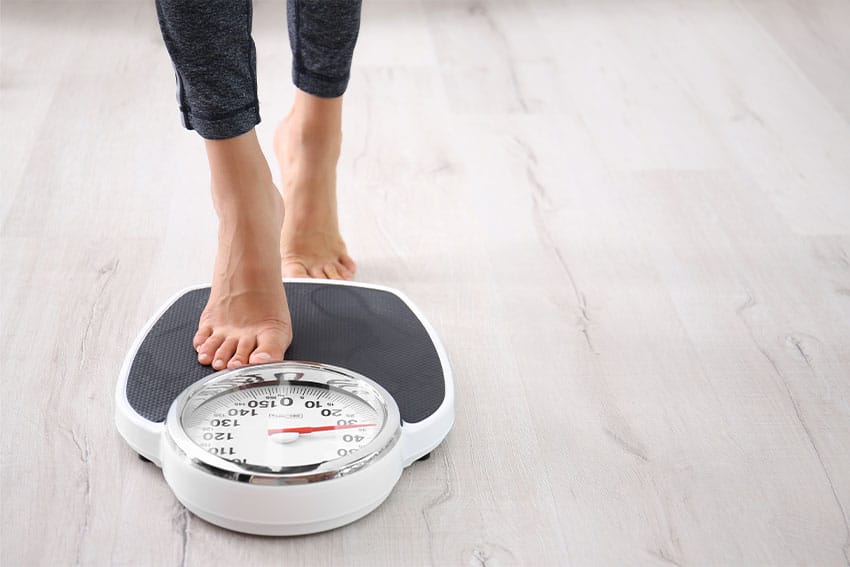 Excess Weight Can Cause Sleep Apnea

One of the first ways weight can play a role in sleep apnea is by causing it. Several conditions can increase the possibility of developing sleep apnea but excess weight is one of the top causes. When you gain weight, it doesn’t just go to your stomach or your thighs, it distributes itself around your entire body. The neck is one of the areas where fat will start to accumulate. As the neck accumulates fat, known as pharyngeal fat, and grows in girth, it can begin to obstruct the upper airway during sleep. The narrow airway is what causes the snoring sound. Air is squeezing through the tiny airway and causing the throat tissue to vibrate and creating snoring noises.

The excess fat won’t just cause the airway to narrow, it can also compress the chest’s wall and decrease lung volume. As the lungs lose max capacity and air struggles to make its way through the upper airway, it’s even more likely that the upper airway collapses. When it does collapse, it causes the body to stop breathing, otherwise known as an apnea episode.

Sleep Apnea Can Cause Weight Gain

On the flip side, sleep apnea can also cause weight gain. Whether your condition was caused by gaining weight or not, once you have the condition, your body will start to change. One of the changes that take place will be a lack of energy. Not sleeping throughout the night and getting poor-quality sleep will make you feel like you didn’t sleep at all. When you’re feeling exhausted, exercise is probably the last thing on your mind.

In addition to having a lack of energy, your hormones will also change. Sleep deprivation can cause a decreased leptin level which is the appetite-suppressing hormone, and an increased ghrelin level which is the appetite-stimulating hormone. In other words, you will feel hungry more often which can cause you to crave calorie-dense foods and overeat. Eventually, the lack of exercise and overeating will lead to weight gain.

Since you feel tired and hungry all the time, you will find it incredibly difficult to stick to a healthy diet and exercise regimen to lose excess weight.

The Health Consequences of Excess Weight and Sleep Apnea

Gaining weight with sleep apnea won’t just force you to upgrade your wardrobe for bigger clothes, but it will affect your overall health. Sleep apnea can already affect your metabolic, pulmonary, and cardiovascular systems. When you combine sleep apnea with obesity you’re also increasing your risk of heart, metabolic, and lung problems.

Some of the potential health consequences include:

Can Losing Weight Improve Your Condition?

Losing weight can significantly improve your condition as well as decrease certain health risks. After losing weight, you might experience less irritability, daytime sleepiness, and see an improvement in high blood pressure, type 2 diabetes, insulin resistance, and cardiovascular health. Moderately obese patients who lose 10 to 15% of their body fat can reduce the severity of their sleep apnea by 50%.

The main problem with prescribing weight loss as a way to improve your sleep apnea condition is that you don’t have enough energy to even get started with an exercise program. Your hormones are also too messed up to stick to a healthy diet. To help jumpstart your weight loss problem, our Columbus sleep dentist at Firouzian Sleep Wellness highly recommends starting with a sleep apnea treatment first. After just a few weeks of wearing your oral appliance, you will start to feel a difference in your daily energy levels and your hormones might regulate back to normal. At this time, you can start exercising and eating right without falling off track or losing motivation. You will have the energy you need to stay consistent.

If you suffer from sleep apnea and you’re struggling to lose weight, you need to start with a proper sleep apnea treatment like oral appliance therapy. Please contact Firouzian Sleep Wellness in Columbus, OH to learn about the different types of sleep apnea treatments we offer. Book an appointment today by calling (614) 683-4640.